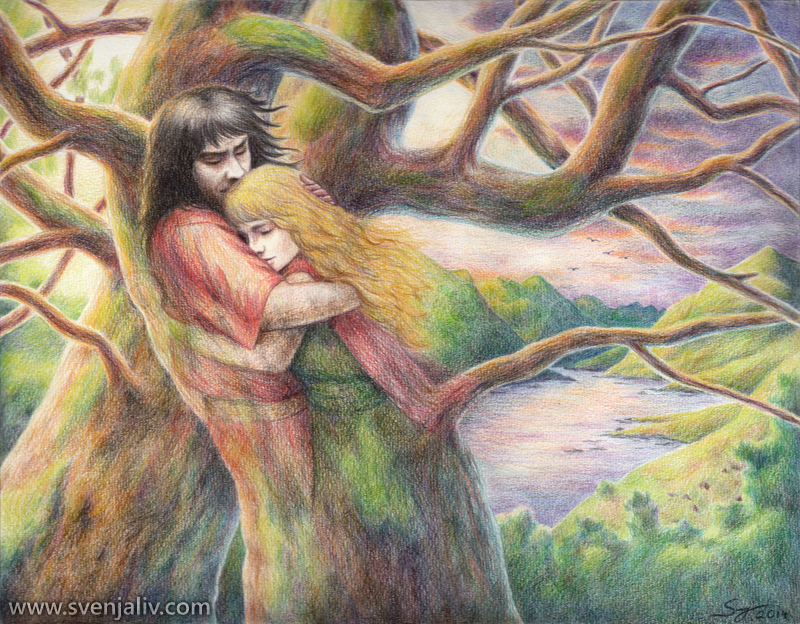 Naoise and Deirdre of the Sorrows

An illustration of the tragic story of Deirdre of the Sorrows and her love, Naoise Mac Uisneach. At Deirdre’s birth, it was prophesied that she would bring great sorrow to Ulster, so the king, Conchobhar, ordered her hidden away until she was old enough for him to take as his wife. Deirdre grew up more beautiful than any other girl, but she didn’t love the king. Instead, she fell in love with one of his warriors, Naoise. Deirdre ran away to Scotland with Naoise and his brothers, and spent a few happy years there. But they missed home, and Conchobhar persuaded them to come back by sending a messenger, saying all was forgiven. But once they were back in Ireland, Naoise and his brothers were betrayed and killed, and Deirdre was married to Conchobhar. She grieved for Naoise and hated the king, and eventually killed herself by jumping off her chariot and dashing her head against a rock.

The illustration shows Naoise and Deirdre’s spirits, re-united after death, against the yew trees that grew from their graves and intertwined. In the background is Loch Etive, in Scotland, where they spent some time.

By continuing to use the site, you agree to the use of cookies. More information